Over the next few months, I will be publishing (with permission of the book club in question) the odd question and answer regarding The Widow’s Fire. Here is a great question from Vicki Broach of the Riverside Book Club, California.  To set the context it’s important to know that The Widow’s Fire starts where the action in Austen’s Persuasion leaves off and that Captain Wentworth finds himself being blackmailed over a prior relationship with a midshipman named Oliver Mason.

Vicki: I have a question having just finished The Widow’s Fire. I’ll begin by saying that although I resisted it at first I came to appreciate your elaboration on Persuasion and enjoyed it very much by the end. My question involves your choice to have Mrs. Smith blackmail Captain Wentworth over his relationship with Oliver. Was there any evidence you found of circumstantial same-sex relationships in the British navy? I’m not saying it was not plausible. I’m just curious if there is historical precedent.I might mention my husband is in the merchant marine and might object to the idea that he would seek other romance while at sea. 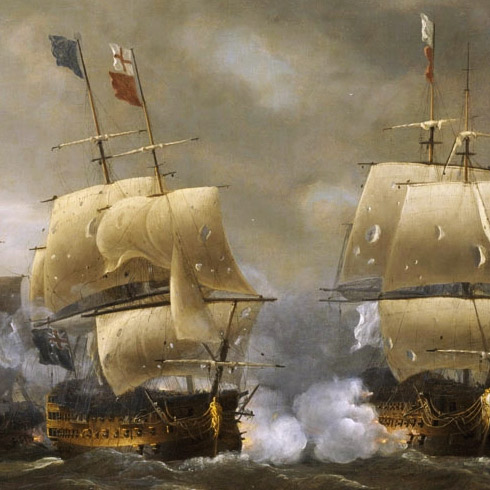 Answer: Thanks so much for the question which is a very good one with a somewhat complicated answer. The act (of “sodomy”) was a capital offense in this era and even after was much more harshly looked upon officially in the Navy than in civilian life. But this of course does not mean it was less common, and there is a great deal of anecdotal writings that suggest it was rather more common in the navy than out of it — it’s almost something of a cliché in the UK.

The punishment was so severe, there is a suggestion that the navy informally adopted the practice of turning a blind eye or punishing the crime euphemistically, calling it  by some other, less damning, name. On the title below find the link to a widely read and influential piece by Arthur N. Gilbert called Buggery and the British Navy 1700-1861 from The Journal of Social History.

While the degree to which same sex relationships was institutionalized is the matter of some debate, the important point from a novelist’s perspective is to capture the sense of trepidation, that this was indeed a capital crime yet at the same time to give the (plausible) suggestion that no one would have ‘outed’ Captain Wentworth at the time, as a certain amount of discretion was the norm. 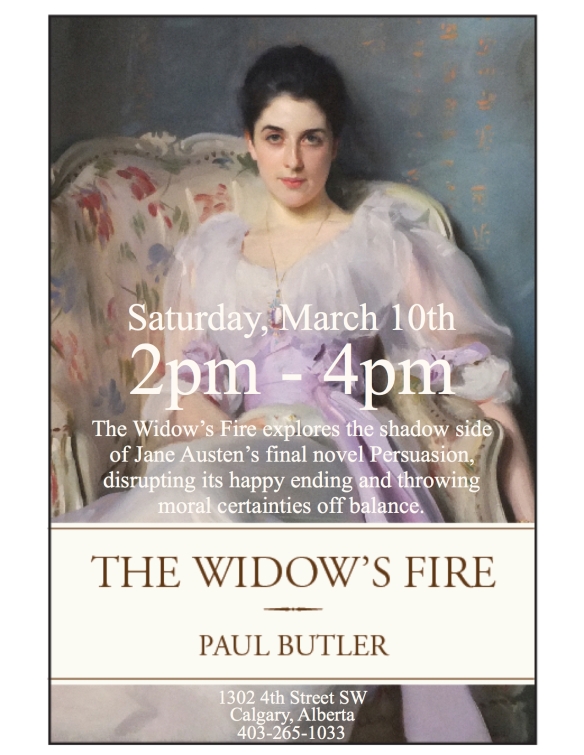 Most writings do seem to suggest this, and I think it comes down to common sense and an understanding of human psychology regarding people of the same sex with all their desires in tact who are in the company only with their own for months and even years on end. Boarding schools and prisons in Britain and elsewhere had the same calm acceptance of same sex couplings.

Stepping into the public marketplace with a novel is always a little frightening. Usually the publisher has arranged a set of readings and signings, and there is some travel. But it’s hard to visualize the audience in advance.

In some respects The Widow’s Fire was no different. My publisher, Inanna Publications, was wonderfully engaged and before I caught sight of the printed book at a joint launch in Toronto, there were already dates from Canada’s East Coast to West Coast, many Canadian dates in between, a US trip to present at the Jane Austen Society of North America’s AGM, and plans for the UK. 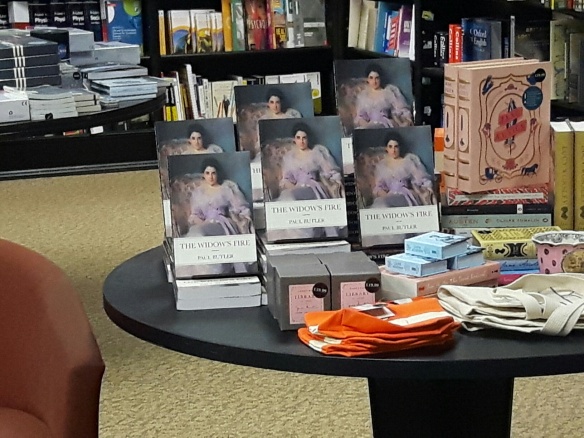 The Widow’s Fire among Austen books and gifts in Waterstones, UK.

But one thing was different from previous publications. This time I could visualize the audience in the sense that at least a core of them would be Jane Austen fans, readers, and scholars.

It would be a coming home of sorts. I’ve been a fan of Austen from my teens. She was the first author to make me favour literature from the 1800s, to enjoy the patterns words and sentences created as they wove around their intended meaning or revealed the bite of irony in the final twist. Nobody brandished this convoluted prose with as much skill as Austen.

But I was also aware I was trespassing.  There is a tangible sense of stewardship among those who adore Jane Austen, and I would soon walk among them. My novel interferes with Jane’s final ending. In The Widow’s Fire, the symmetrical finale of Persuasion goes off the rails letting in the darker themes explored by Gothics such as the Brontes, and, later by postcolonial fiction.

The whole project in fact related back to a crisis in faith I’d once had as a young reader and English major thirty something years ago. I really liked Austen’s novels — a lot. But I could not articulate my partiality beyond a somewhat stuttering and infuriated, it’s just …just …really good!

Austen wasn’t particularly cool in 1980s literary circles in Britain, at least not the ones surrounding me. Up against the grittiness of Dostoevsky or Orwell or even Dickens, she was seen as very socially conservative. Her plots reinforced the class system. Honest and good-hearted heroines are rewarded by marrying men like Mr. Knightley and Mr. Darcy who were not only rich but also close to the pinnacle of the rigid social structure of Regency England. By the time this coupling took place, these romantic heroes would have also proved themselves as noble and decent as their heroine counterparts. People slightly lower in the social order — George Wickham, Mr. Elton — might appear charming at first but before too long some serious cracks  appear. Virtue, therefore, correlated at least in some important respects to wealth and social standing. 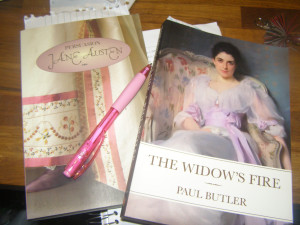 You can’t really argue with this other than to point out that Austen was dealing with genre expectations, albeit ones she had helped to create, and that her artistic brief was never to challenge existing societal structures. Perhaps there was a backhanded social criticism anyway. She does depict, albeit in a comic, detached way, the moral indignity of the social climber. People trying to better their stations — Mr. Elton and Mr. Collins for instance — are among Austen’s most merciless creations. Perhaps it was up to other writers to explore more closely, and with more compassionate understanding, the cause and effect of extreme social inequality. But the lengths to which acquisition drives people is vividly magnified in Austen.

What was obvious to me then, and remains so now, is the clear sighted and perceptive ways Austen illuminates every shade of human behaviour. For the reader there is a kind of safety in this aspect of the novels, a kind of relief. We know how the world goes and here is someone interpreting it for us with rare wit and a precision. Why should she need to offer solutions?

In this one sense Austen speaks to the idealist in us. How can you possess such intelligence, such wit and insight without also possessing fairness and compassion? If the two don’t go together on the pages of the novel, they will in the mind of the reader.

Austen recoils from sermonizing. We have to ask ourselves what kind of writer would create, as Austen did with Emma Woodhouse, a protagonist “no one but myself will much like”. The famous quote is a key of sorts. Austen was right. Few readers can read Emma without becoming enraged at Emma — regularly. They should. Austen respected her reader enough to create Emma, to let her presumptuous, interfering and snobbish behaviour (towards poor Robert Martin and Miss Bates) burn its way through the entire story. This happens with little undue authorial interference until she is (partially) humbled. Then youth and over-indulgence at an impressionable age present themselves as final mitigations.

This is life as it is. It makes us squirm because we recognize it. Austen offers us wit, wisdom, and intelligence. And under the right circumstances these are in themselves graces — moral ones with the power to challenge social structures if we are sufficiently engaged.

Lauri Sayles, Chair of the Calgary branch of the Jane Austen Society of North America (JASNA), will also talk about the organization.

There will refreshments and plenty of time to talk all things Austen!

Reading for leisure is an honour and a privilege - thenatashareads

From the Pen of Mae Clair

Mystery and Suspense, Flavored with Folklore

A writer and her reading.

Curls Around The World

Traveling the world, not to escape life but so life will not escape me.

BY GRACE THROUGH FAITH

Reviews, news, features and all things books for passionate readers

Vague Meanderings of the Broke and Obscure